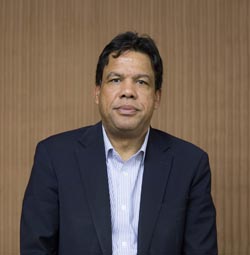 Mr Lionel October was appointed as the Director-General for the Department of Trade, Industry and Competition, with effect from 1 April 2020.

He was previously appointed as Director-General of the Department of Trade and Industry from 21 April 201l, after acting in the  position from 01 January 2011.

Prior to his appointment as Acting DG, he served as the Deputy Director-General (DDG) responsible for the enterprise and economic development portfolio, and served as an Economic and Trade diplomat at the South African Embassy in Brussels from 2007 to 2011. He was instrumental in key trade negotiations with the European Union.

Under his leadership as the DDG, the dti has spearheaded key industrial and enterprise development policies such as the National Industrial Policy Framework and Action Plan, and the development and implementation of Broad-Based Black Economic Empowerment legislation, to name a few.

Current Position
Director-General of the Department of Trade, Industry  and Competition of the Republic of South Africa.