Fronting means a deliberate circumvention or attempted circumvention of the B-BBEE Act and the Codes. Fronting commonly involves reliance on data or claims of compliance based on misrepresentations of facts, whether made by the party claiming compliance or by any other person. Verification agencies, and /or procurement officers and relevant decision-makers may come across fronting indicators through their interactions with measured entities.

Window-dressing: This includes cases in which black people are appointed or introduced to an enterprise on the basis of tokenism and may be:

Benefit Diversion: This includes initiatives implemented where the economic benefits received as a result of the B-BBEE Status of an enterprise do not flow to black people in the ratio as specified in the relevant legal documentation.

Opportunistic Intermediaries: This includes enterprises that have concluded agreements with other enterprises with a view to leveraging the opportunistic intermediary’s favourable B-BBEE status in circumstances where the agreement involves:

In order to effectively deal with the scourge of Fronting, verification agencies, and/or procurement officers and relevant decision makers are encouraged to obtain a signed declaration from the clients or entities that they verify or provide business opportunities to, which states that the client or entity understands and accepts that the verification agency, procurement officer or relevant decision maker may report Fronting practices to the dti. Intentional misrepresentation by measured entities may constitute fraudulent practices, public officials and verification agencies are to report such cases to the dti.

Procedure for reporting of Fronting :

The following diagram depicts the procedure for reporting Fronting practices: 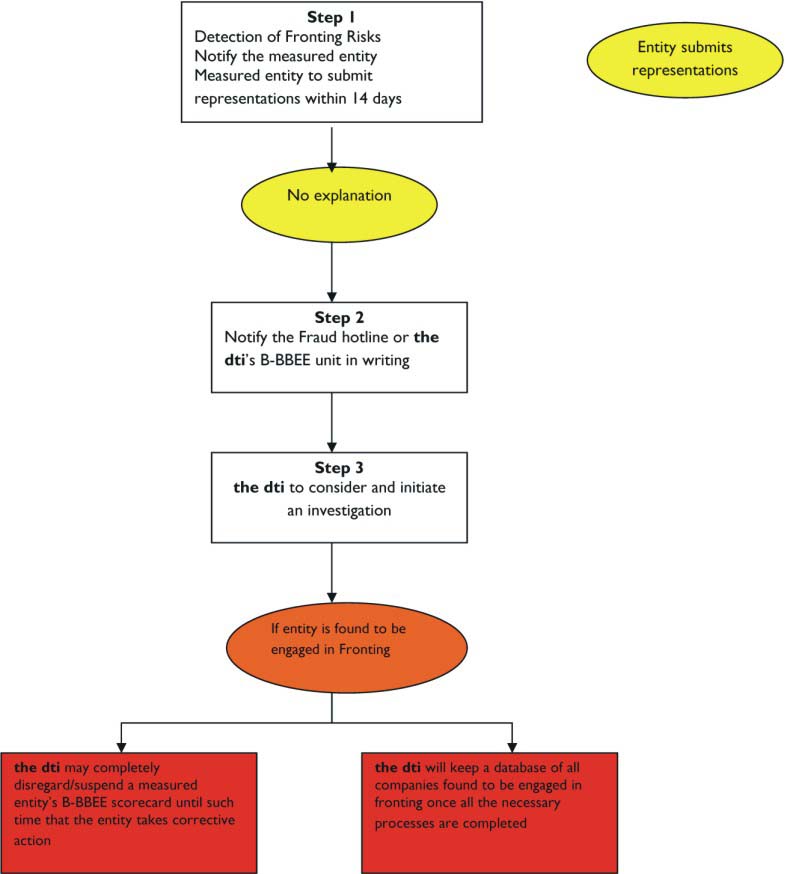 Complex Structures and Transactions, and Fronting