1. Setting up the deal
Once you have established your sales contract, by either being in possession of an international purchase order or a documentary credit stating you as the beneficiary, you are now in a position to process the order. There are a few steps you should go through when processing an export order. However, you must first wait until the deal has been properly established before committing your resources to the order. 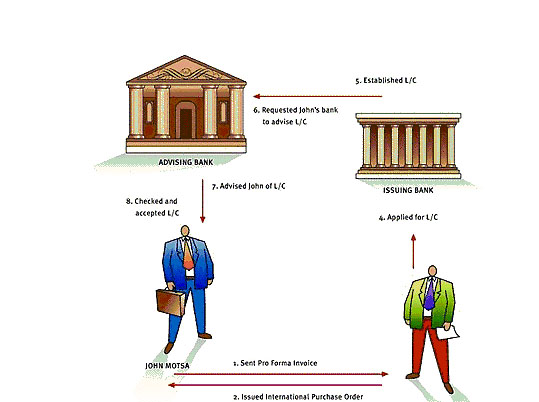 Case Study:
As you can see, John Motsa has received an international purchase order from Bill Jones and has been advised by his bank of the documentary credit made available to him by Bill’s bank in London. John has checked the documentary credit (L/C) according to the checklist and has accepted the credit without amendment.

2. Shipping the goods
Once the deal has been set up, you should take the following steps: 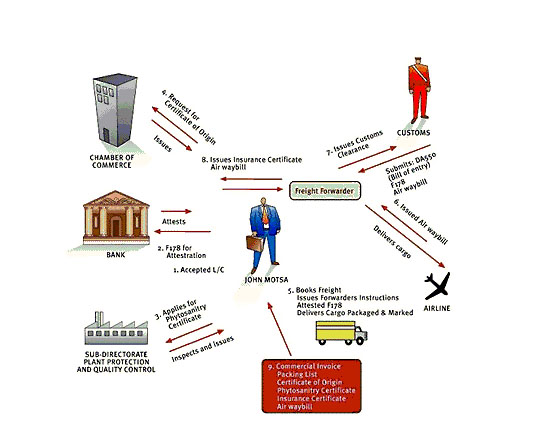 Case Study:
Based on the L/C, John completed his F178 and had it attested at his bank. He then applied to the Directorate: Plant Protection and Quality Control for the issue of a phytosanitary certificate. Based on his declaration, the certificate was issued. He then went to the Johannesburg Chamber of Commerce and arranged for the issue and authentication of a certificate of origin. John was now in a position to ship the goods. He contacted his forwarder, made a booking on the next available flight to London and sent the forwarder a freight forwarder’s instruction, along with his original attested F 178. At the same time, he arranged for his assistant to deliver the honey to the forwarder’s premises at Johannesburg International Airport. The forwarder handed the cargo over to South African Airways and was issued an Air waybill. A DA 550 was completed and submitted, along with the F178 and Air waybill to Johannesburg International Airport Customs. Customs clearance was obtained and the forwarder issued an insurance certificate according to the information in the freight forwarder’s instruction. The forwarder then handed over the Air waybill, insurance certificate, F 178 and DA 550 to John. John was now in a position to issue his packing list and commercial invoice. He now had all the documents required by the L/C. 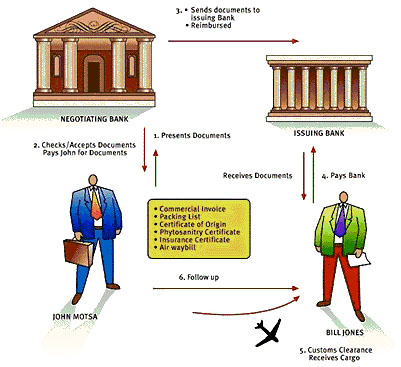 Case Study:
John carefully checked all his documents against the L/C and was satisfied that everything was in order. He noted that he only had two days after shipment within which to present his documents to the bank. He went to the bank and presented his documents to a bank official, who checked them against the L/C. Everything was in order and the documents were accepted. John then signed a Form E, which cancelled his F178 obligation, and allowed the bank to buy his US dollars. The bank deposited the rands into his account two days later. John had just completed his first export order.

The bank sent the documents to the issuing bank in London, which in turn has handed them over to Bill Jones. Bill, in the meantime, has taken receipt of the honey, based on an airway release issued by his bank, as the documents have taken longer than the goods to get to London. Bill now has the honey in his warehouse and John has been paid.

4. Follow-up and service: The key to future success
The most important part of your export market development process has now arrived. It is sometimes more difficult to secure a follow-up order than it is to achieve the first order. It is vital, at this point, to get feedback from the buyer as to whether you have met his needs. It might be necessary, to plan a follow-up visit to secure your position with the buyer and check to see whether his needs have changed. The chances are that one of your competitors has taken action against your entrance by possibly offering the buyer better terms of payment. It is vital that you develop your market intelligence in order to take whatever action is necessary to keep your market and increase your market share.

Case Study:
John has received enquiries from Germany which look promising and has just arranged another visit to Europe. He has made arrangements with Bill Jones to attend the launch of his honey at one of the main retailers in London.

The following set of documentation will assist you with completing the required documents for processing your export order: