The B-BBEE Commission has today released the report on the National Status and Trends on broad-based economic empowerment (B-BBEE) for the calendar year 2019, which report shows a 1% (43%: 2018 – 42%: 2019) decrease in the number of submitted compliance reports by JSE listed entities and 5% (10%: 2018 – 15%: 2019) increase by organs of state, with the majority of measured entities still failing to comply with section 13G of the B-BBEE Act. A webinar session to discuss the report will take place on 29 July 2020 at 10h00, facilitated by Shawn Theunissen (Property Point), and with panelists Andile Nomlala (Black Management Forum) Andile Khumalo (Entrepreneur) and Tabea Kabinde (Commission for Employment Equity).

Section 13G of the B-BBEE Act makes it compulsory for all JSE listed entities, organs of state, public entities and SETAs to submit compliance reports on B-BBEE to the B-BBEE Commission on an annual basis, which reports are analysed in terms of section 13F (1) (g) of the B-BBEE Act. The National Status and Trends on B-BBEE report is normally released in the first quarter of each financial year, but was delayed slightly due to Covid-19 national lockdown this year, and is now available on www.bbbeecommission.gov.za.

In total, the report is based on compliance reports from 150 JSE listed entities, 43 organs of state (including SETAs and public entities) and 5 818 entities whose B-BBEE certificates were uploaded to the B-BBEE Commission Certificate Portal for the year under review. The reporting helps the B-BBEE Commission to track how the country is performing against the scorecard set in the Codes of Good Practice and the respective sector codes on an annual basis, testing ownership, management control, skills development, enterprise and supplier development and socio-economic development.

On average, contributions towards skills development and enterprise & supplier development ranged between 50%-60% in 2018 and the 2019 performance shows an average of 49%-51%. Black people continue benefiting from bursaries, partnerships and incubation opportunities under these elements, however, absorption into a job or sustainable supply chain remains a challenge, amongst other things. The analysis has not expanded to cover the impact and sustainability of the initiatives reported.

The B-BBEE Commission reiterates its concern about the low level of reporting and the overall slow pace of economic transformation. To address this, the B-BBEE Commission has started conducting site visits on the reports submitted verify the accuracy of the reports submitted and to identify best practices to share with other measured entities. Also, preparation to refer measured entities that failed to submit reports are underway as their conduct is not only a violation of the B-BBEE Act, but enables the harbouring of fronting arrangements.

There are also worrying trends observed over the three-year period 2017-2019. Though black ownership indicates slight change, the black ownership percentage does not always correspond with the management control scores. For instance, an entity is able to score full points for ownership and very low on management control, which gives the impression that despite black ownership recorded, black people are not involved in the control and core operations of the measured entity. Also, the saturation of management control points is still between junior and middle management, also noting the rotation of black executive from one measured entity to another, without utilising the skills development element to create a pipeline of new black executives.

For the real and accelerated broad-based black economic empowerment to be achieved, the B-BBEE Act must be applied consistently by both the private and public sector, particularly in regard to section 10 and section 13G of the B-BBEE Act, which are mandatory. Also, ownership, skills development and enterprise and supplier development are priority elements, however, performance overall is not satisfactory (see below table of 3-year summary). 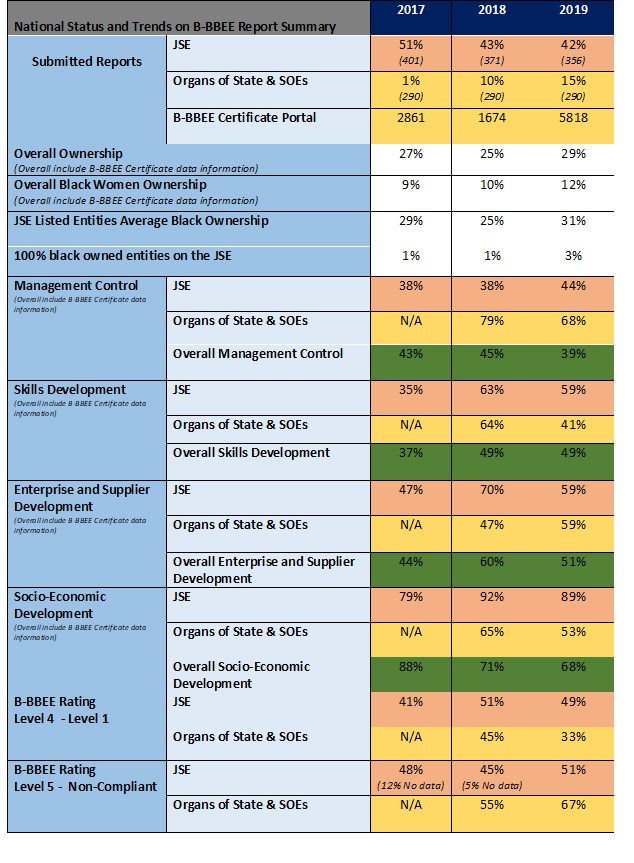 A compliance driven strategy was applied over the three-year period (2017-2019) to encourage compliance and given high levels of non-compliance, the B-BBEE Commission has resolved to invoke the corrective enforcement strategy, which may result in adverse findings and entities referred for prosecution. The B-BBEE Commission, however, remains open to assist private and public sector entities to adhere to the B-BBEE Act free of charge.

The B-BBEE Commission was established in terms of section 13B of the B-BBEE Act 53 of 2003 as amended by Act No 46 of 2013 with powers effective from 6 June 2016. The
B-BBEE Commission’s mandate, amongst others, is to supervise and encourage adherence to the B-BBEE Act in the interest of the public, conduct reactive and proactive investigations and promote good governance and accountability by creating an effective and efficient environment for the promotion and implementation of the objectives of broad-based black economic empowerment.

Issued on behalf of the B-BBEE Commission by: