The Free State-based Botshabelo Industrial Park has attracted investments to the tune of more than half-a-billion rand because of the revitalisation programme being rolled out in the park by the Department of Trade, Industry and Competition (the dtic). This was announced by the Property Manager of the Free State Development Corporation (FDC), Mr Edgar Kgaile. He was briefing a stakeholder delegation from the dtic, led by the Deputy Director-General of Spatial Industrial Development and Economic Transformation, Mr Sipho Zikode, the Development of Southern Africa (DBSA), and the Free State Department of Economic, Small Business Development, Tourism and Environmental Affairs (Destea).

The upgrading of the park is part of the dtic’s Revitalisation of Industrial Parks Programme, which is implemented throughout the country to renovate state-owned industrial parks located in historically disadvantaged areas. The objectives of the revitalisation programme include promoting industrialisation, attracting investments, increasing the occupancy rate of the parks, driving retention and expansion, and addressing inequality.

According to Zikode, the dtic has invested R760 million in industrial parks across the country through the revitalisation programme since its inception in 2015. The revitalisation is implemented in phases with the first phase focusing on upgrading the security features. Phase one of the Botshabelo Industrial Park was approved for funding of R24m and was the first industrial park to reach completion. The second phase was approved for almost R50m and construction started in September last year and is expected to be completed in December 2020.

“Since the completion of phase one of the revitalisation, the Botshabelo Industrial Park has welcomed 25 investors, investing a total amount of R201 million. The total number of jobs created is 1 360. In the pipeline, we have six investors and one of them being Hangda Trading that will be investing R300 million in steel smelter construction and employing 2 000 people. The construction of the smelter has already begun,” says Kgaile

He adds that the occupancy of the park has increased to 75.5% as a result of the positive impact of the upgrading has had.

108 of them are occupied and operational. The revitalisation project has completely changed the image of the park and the perception many businesspeople had about it. We are continuously receiving enquiries from businesspeople that want to locate their businesses in the park.

The two phases of the upgrading of the park have made it attractive to investors. As a result, stakeholders are already in discussion over the third phase which will be rolled out to boost the electrical capacity of the park in order to meet the growing demand,” says Kgaile.

The Botshabelo Industrial Park will also house a state-of-the-art digital hub that has been funded to the tune of R5m by the Small Enterprise Development Agency (Seda), an agency of the Department of Small Business Development. Seda is currently hosting activations and boot camps in Thaba Nchu, Botshabelo and Bloemfontein to create awareness about the digital hub and to identify young people who will receive training at the hub as part of developing entrepreneurs in innovation to equip them for the Fourth Industrial Revolution.

the dtic is in the process of establishing digital hubs in upgraded industrial parks in order to provide the youth and unemployed population with access to information and communication technology, and other facilities that will move them closer to business and job opportunities. 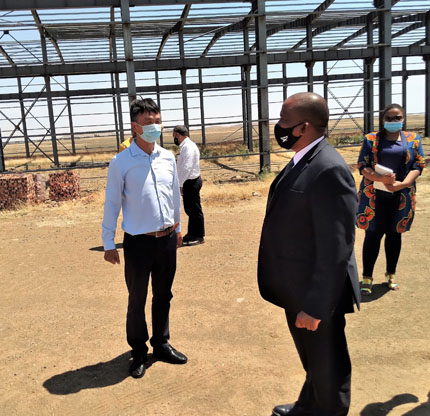 The Deputy Director-General of Spatial Industrial Development and Economic Transformation at the Department of Trade, Industry and Competition (the dtic). Mr Sipho Zikode in conversation with Mr Jackie Gao, whose company, Hangda Trading is constructing a smelter (seen in the background), in the Botshabelo Industrial Park