Businesses Lining Up to Invest at Dimbaza Industrial Park

Eastern Cape businesspeople are lining up to invest in the Dimbaza Industrial Park which is undergoing a facelift that has already started to improve its physical image and is capturing the attention of the private sector, The park, which is based near King Williams Town, was approved for a R50-million security infrastructure upgrade by the Department of Trade, Industry and Competition (the dtic) as part of its Revitalisation of Industrial Parks Programme. The revitalisation programme of state-owned industrial parks is geared towards promoting industrialisation, manufacturing and job creation and boost South Africa’s  economic growth.

One of the objectives of the programme is to accelerate economic development in the lagging regions of South Africa by attracting business investments to locate in these areas. All spheres of government are working together to transform the Dimbaza Industrial Park into a hive of activity as an integrated agro-industrial hub for innovation, product and process formulation in the food and related industries.

According to the Regional Manager of the Eastern Cape Development Corporation (ECDC), who are the owners of the park,  Mr Rufus Nayo, there are numerous businesspeople that are queuing to invest in the park by setting up their operations there.

“Businesspeople in the region in particular, and the province in general, are keen to invest in the park. The upgrading of the park has created a lot of interest among  the private sector. We have received quite an impressive number of applications for space as a provincial investment promotion agency managing the park. In addition to new potential investors, there are companies that are already operating in the park that have indicated their plans and interests to expand operations as a result of the sense of security and confidence in the park that have been generated by the upgrading of the security features,” says Nayo.

He expressed optimism that the park’s occupancy rate will improve significantly as a result of the revitalisation initiative.

“Currently the occupation rate of the 102 factories located in the park stands at 24%. This is due to the condition of the park as there is a lot of work that still needs to be done on many of the factories that have been vandalized over a period of time. The installation of the security features by the dtic as the first phase of the revitalisation programme has gone a long way in changing the perception of businesspeople towards the park. It will also give us an opportunity to focus on the upgrading of the damaged factories without any security concerns as the perimeter fence and installation of the gates have resulted in controlled access to the park where we have posted security guards on a 24-hour basis,” says Nayo.

He adds that the fully revitalised Dimbaza Industrial Park will create jobs for locals,  attract direct domestic investment, contributing to economic growth of the province and the country. Currently, more than a thousand people are employed at the park.

“The are companies that are so eager to set up here that they are even prepared to identify suitable factories and renovate them themselves. We have already signed lease agreements with some of them,” says Nayo.

One such businessman who is eager to open a factory at Dimbaza is Danny Haslam with whom Nayo was driving around the park to show him various factories, even those dilapidated. Haslam owns a successful  concrete slap-manufacturing business in Butterworth, Tshawe Blocks and Hardware, where he employs 80 people.

“I am planning to expand and set up new operations here in Dimbaza after I heard about the revitalisation of this park by government. I decided to come and see for myself. I must admit I am impressed by the work that is done here and the plans outlined by ECDC about this park. I am planning to invest in one of the factories and contribute in creating jobs by employing about 50 members of the local community for a start,” said Haslam. 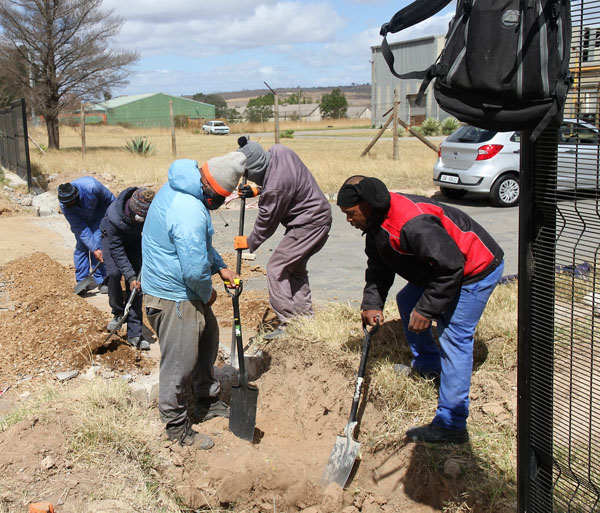 Changing the face of the Dimbaza Industrial Park – constractors preparing the site of the security gate.. 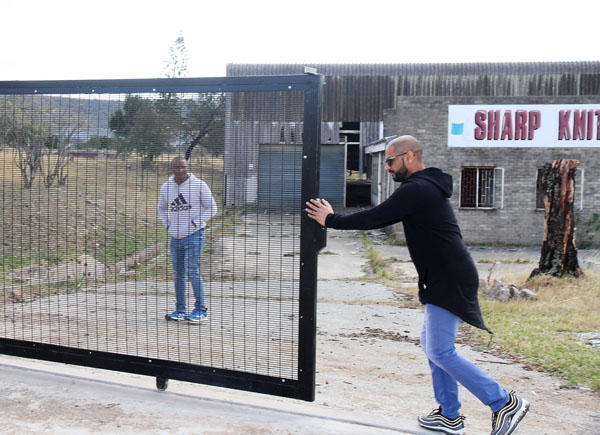