The Department of Trade, Industry and Competition (the dtic) is happy with the commendable milestone achieved by the Musina-Makhado Special Economic Zone as earth-moving machines prepare to roll onto the north side of the zone and raise the dust that will be welcome by the community of Musina. This was said by the Deputy Minister of Trade, Industry and Competition, Mr Fikile Majola.

He was addressing more than 500 people who attended a function held on a freshly-cleared piece of land outside the town of Musina. Chants of “Let the dust go up” reverberated throughout the massive marquee as speaker after speaker reiterated that there would be dust in the area soon, and the people of Musina should brace themselves for a period of inconvenience that will change their town into a beehive of activity as construction of the bulk infrastructure in the economic zone gains momentum.

“This is a big and commendable milestone in the rollout of the MMSEZ. It is a historic moment for the people of Musina and surrounding areas. Their town will never be the same again. This project is going to change it forever. This is a huge step in the right direction for the practical implementation of the Special Economic Zones Programme that the dtic is spearheading. This the dawn of a new ear: when the dust settles, a bustling economic hub and a vibrant smart city will emerge. And Musina will be described in new terms,” said Majola.

“As a department we are delighted with this kind of progress, and are committing ourselves to ensuring that the Musina-Makhado SEZ creates the much-needed jobs for the people of Musina, grow the town’s economy and promote industrialisation and manufacturing of goods for domestic consumption and exports in line with the objectives of the SEZ Programme,” added Majola.

He emphasised the need for the three spheres of government and the private sector to work together in the interest of developing the SEZ for the benefit of the Limpopo economy in particular, and South Africa in general. He also expressed his gratitude for the companies that have already lined up to invest in the SEZ. These include an electric vehicles manufacturing company whose electric bus was displayed at the event, as well as chemicals and agro-processing companies.

“The next crucial step is to ensure that we drive the aggressive investment promotion, attraction and facilitation. We want international and domestic investors to come and invest in this SEZ and the entire region. This project has the potential to facilitate regional integration through the African Continental Free Trade Area which is aimed at boosting intra-African trade. The zone is developed in an area close to N1 which connects South Africa and the rest of the continet. It is strtegically located close to neighbouring African countries such as Zimbabwe, Botswana and Mozambique” noted Majola

The bulk infrastructure in the north side of the SEZ is estimated at approximately R2.9 billion and is expected to create employment for the people of Musina, as well as opportunities for local small and medium enterprises. The Limpopo provincial government has already allocated R600 million for bulk installations. The targeted bulk services projects will include a water pipeline, water treatment plant, reservoir, a 10MVA electricity substation, internal roads, storm water drainage system and integrated security infrastructure.

The MMSEZ is made up of two strategic sites, the northern site located at the Antonvilla Farm within the Musina Local Municipality. This site is designated for light to medium industrial activities focusing on manufacturing, agro-processing and logistics sectors. The second site, which is located on the border between the Musina and Makhado local municipalities, is designated for a heavy industrial park focusing on renewable energy and metallurgy. It is anticipated that the MMSEZ will create more than 21 000 direct and indirect jobs in the short to medium period and over 60 000 in the future. 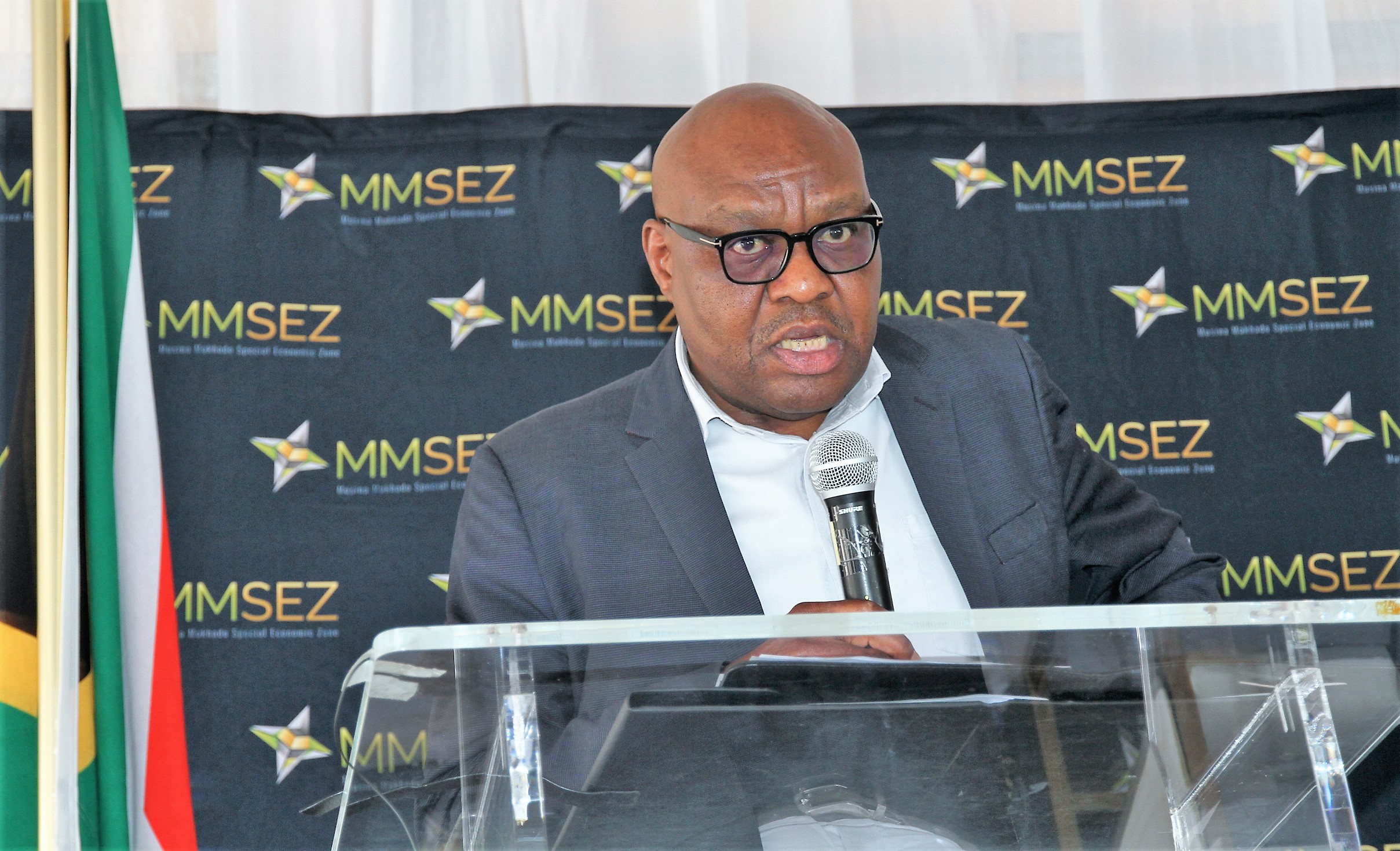 The Deputy Minister of Trade, Industry and Competition, Mr Fikile Majola speaking at the function to mark the commencement of the construction of the Musina-Makhado Special Economic Zone. 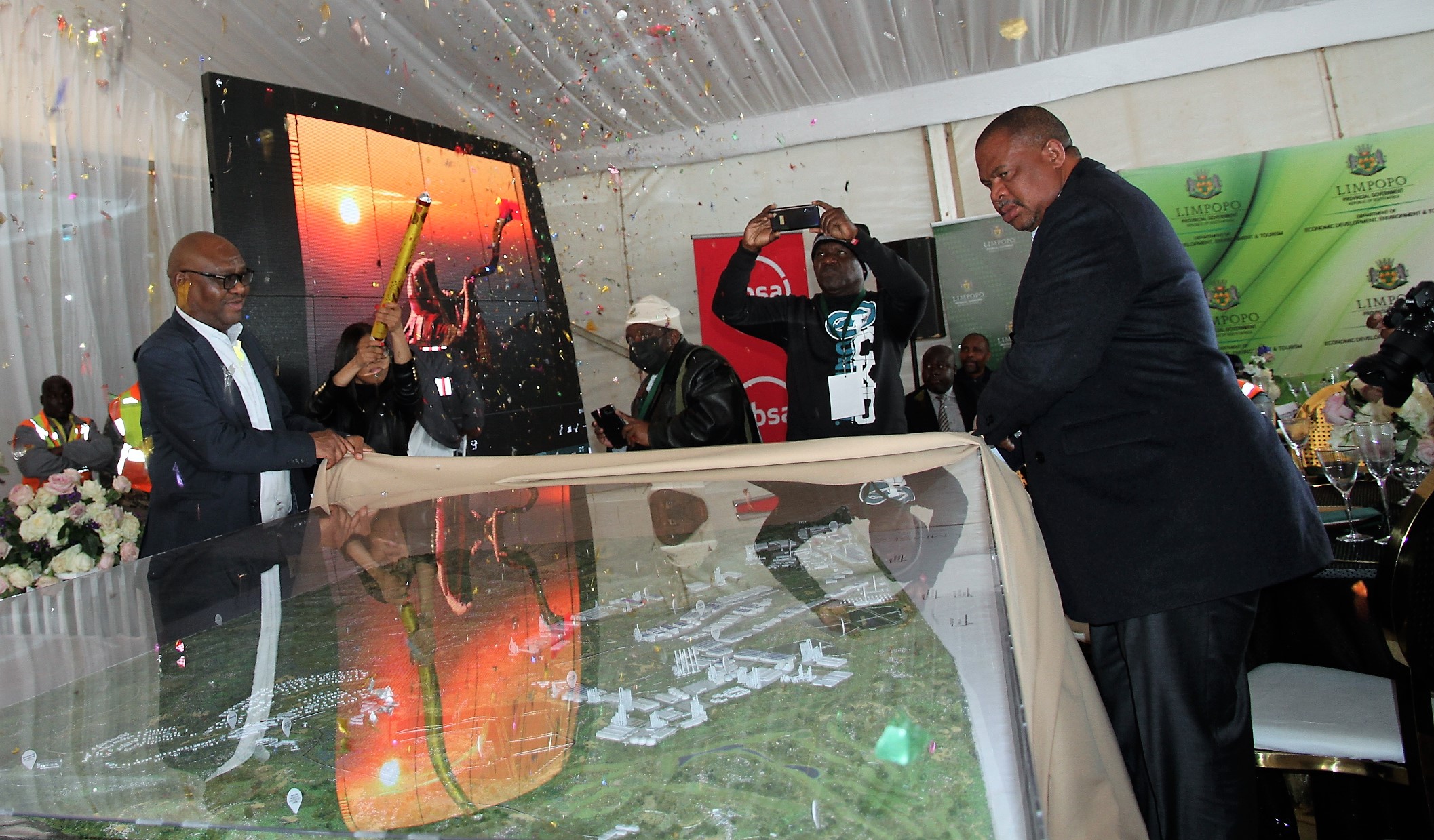 The Deputy Minister of Trade, Industry and Competition, Mr Fikile Majola and the the MEC for Economic Development, Environment and Tourism in Limpopo, Mr Thabo Mokone unveiling the 2D model of the North Side of the Musina-Makhado Special Economic Zone.