The Chief Executive Officer of Productivity SA, Mr Mothunye Mothiba says improved collaboration of strategic partners can increase improvement in competitiveness and sustainability of enterprises. Mothiba was speaking during the second leg of the Workplace Challenge milestone workshop where client companies shared how they managed to successfully deal with challenges stemming from the new world of work. The workshop took place in Kimberley, Northern Cape.

The aim of the workshop was to recognise companies that have demonstrated resilience in the difficult economic environment to sustain their businesses through the implementation of Productivity SA‘s Workplace Challenge Programme.

Mothiba called on the Northern Cape Economic cluster departments to work with Productivity SA and the dtic to improve the competitiveness and sustainability of their economies and enterprises, particularly Small, Medium and Micro Enterprises (SMMEs), both formal and informal operating in the priority productive sectors.

“As we gather here today in a bid to improve the competitiveness and productivity of Northern Cape enterprises, it is worth acknowledging that the South African community does not work in silos and our success is affected by various variables. One of the key variable that is ideal for a favourable competitiveness and productivity improvement is South Africa‘s economic growth. Importantly, the growth of our enterprises leads to better economic performance and better economic performance leads to the growth of our enterprise. The two go hand in glove and one cannot function optimally without the other,” said Mothiba.

According to Mothiba, the collaboration with strategic partners is key in realising the needs of the target market in a comprehensive and systematic way. One such strategic partner has been the Small Business Development Agency (Seda) which has worked jointly with Productivity SA in providing the necessary capacity building interventions to 27 entrepreneurs in the Northern Cape during Financial Year 2021/22.

Mothiba noted that the numbers were still low and there was a need for more entrepreneurs to be trained, this he said would lead to desired competitiveness and sustainability of enterprises which will lead to job creation and increased profits.

Dr Johan van der Spuy from the School of Economic and Management Sciences at the Sol Plaatjie University, noted that SMMEs were seen as vehicles to address the problem of high unemployment levels in SA due to their high labour-absorptive capacity. He further explained that SMMEs stimulate domestic competition by creating market niches in which they grow until they identify a new niche as a response to demand changes, and for them to be internationally competitive because of their flexibility.

“In SA one of the most significant obstacles to entrepreneurial activity is lack of education. Education is positively related to entrepreneurial activity and lack of management skills by SMME owners and managers can be ascribed to lack of education and training. Education and training help build management competencies which are essential for the success of the enterprise,” said Dr Spuy.

In pointing out key policy interventions for SMMEs, Mr Daryll Christians from the Northern Cape Department of Economic Development and Tourism (DEDaT) said skills development remained critical for SMMEs to flourish. He said the province has partnered with the private sector and existing institutions of higher learning to develop a green training academy in NC to ensure development of necessary skills to support this nascent sub-sector. 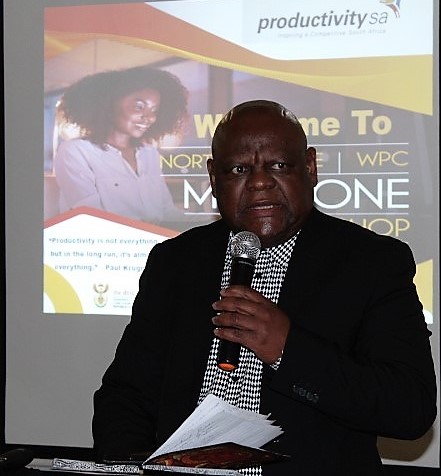 The Chief Executive Officer of Productivity SA, Mr Mothunye Mothiba speaking during the second leg of the Workplace Challenge milestone workshop where client companies share how they managed to successfully deal with challenges stemming from the new world of work.