The Solidarity Fund announced the receipt of a R50m grant from the government of the United Kingdom (UK). The grant is aimed at extending the Solidarity Fund’s ongoing efforts to counter the repercussions of the COVID-19 pandemic in South Africa – focusing specifically on projects supporting and promoting women.

This contribution forms part of the UK’s international COVID19 response and recovery efforts, and signals their support for the Solidarity Fund as an independent, South African run initiative. The sum earmarked for the Fund amounts to a £2.15m (R50m) donation that will be used to bolster high priority initiatives currently supported by the Fund.  To date, the UK has committed £6.5m in support of South Africa’s response to the pandemic.

Speaking at the signing ceremony, the Deputy Minister of Trade and Industry, Ms Nomalungelo Gina thanked the UK government for the donation, and said without a doubt, the amount of R50 million will go a long way in making a difference.

“I am excited that the British Commission has made specifications that this donation must be directed to the fight against gender-based violence that the country is facing and that it must also be channeled to the supporting of women economic empowerment and Small, Medium and Micro Enterprises,” said Gina.

According to Gina a special portion of the donation will be paid to women involved in agricultural projects through a voucher system.

“Evidence shows that we have more women than men in the agricultural sector, both the small-scale farming and subsistence farming in our rural areas. Women produce food for their households and sell some of these products as hawkers at taxi ranks and other public spaces. It is therefore logical that empowerment of women in this important sector will boost their efforts,” added Gina.

The British High Commissioner to South Africa, Mr Nigel Casey, said they were delighted to be able to contribute to the Solidarity Fund, a new and innovative initiative which combines  public, private and individual commitment  in tackling the impacts of this global crisis.

“We are particularly pleased to support the Fund’s work to  help  women affected by persistently high rates of gender-based violence and to promote  women’s economic inclusion and empowerment along the long road to recovery,” said Casey.

The Interim Chief Executive Officer of The Solidarity Fund, Ms Nomkhita Nqweni said even though South Africa had come so far, the journey is far from over.

“Donations such as these, and all the generous contributions from governments, business and individuals, enable us to keep the fight going and provide much needed assistance to those who need it most,” said Nqweni.

One of the many, tragic consequences of the COVID-19 lockdown has been a reported upsurge in cases of gender-based violence. Lockdown restrictions have increased the already high demand for GBV-related services and have also made it more difficult for women and children to access critical information and support.

The Solidarity Fund can make a meaningful contribution to ensure approximately 360 existing local and community organisations that provide critical services in the GBV eco-system can continue to do so for the thousands of women and children affected by GBV. With this grant, funding for the second intervention in Gender-Based Violence support will now increase from R50m to R75m.

Subsistence and household farmers have been impacted by the COVID-19 restrictions, compromising their ability to continue their ongoing  farming activities or preparing for the next farming cycle. These farmers, who are predominantly women, play a critical role in household food security. By supporting their ongoing ability to produce food, it would prevent these households from being pushed into a deeper poverty trap and provide direct access to food.

A farming input voucher for subsistence/household farmers has been deemed to be an appropriate short-term response to supporting these farmers. The total number of beneficiaries is estimated to be 47 000, across all 9 provinces. The UK government’s donation will increase funding for the farming input voucher project to R100m, targeted at 66% women subsistence/household farmers in rural areas.

To find out detailed information and reporting around donations received, projects and approvals, as well as the impact the Fund is having, visit www.solidarityfund.co.za  and follow  the Solidarity Fund on Facebook, Twitter and Instagram. 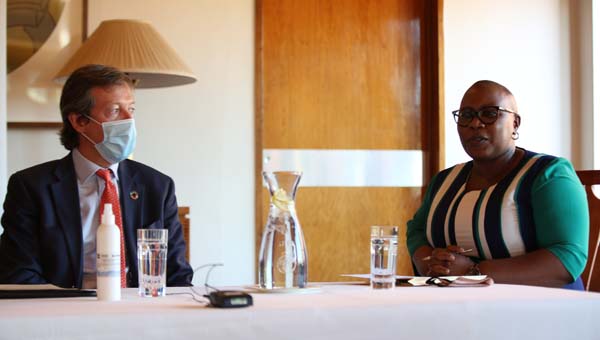