Communities are the Core of the SA Economy – Deputy Minister Gina

The Deputy Minister of Trade, Industry and Competition, Ms Nomalungelo Gina says  communities are the core of the country’s economy and should play a key role in working together with businesses operating within the communities. Gina was speaking at the uMkhanyakude Community Centre where she was handing over computers to a business which suffered losses during the looting of the Ingwavuma Shopping Centre in uMkhanyakude, KwaZulu-Natal in July.

According to Gina, the recent looting in KwaZulu-Natal emphasised the need for both communities and businesses to work hand in hand to protect the economy and the infrastructure that brings both growth and employment in the area.

“As government we have been given a mandate to restore and re-build the economy for all the communities that were affected by the recent looting and anarchy. We have a huge task to make sure the future of these local and township economies are protected and restored,” said Gina.

Gina pleaded with the community of uMkhanyakude to protect what she called the livelihoods of future generations and entrepreneurs. She said without co-operation between government, the private sector and communities, the future of the country might be compromised.

“Our immediate objective would be to ensure some urgent restoration and functionality of destroyed businesses so that the capacity for re-employment of workers, the supply of basic food necessities to communities, and the kick-start of the local economy can occur,” added Gina.

The community of uMkhanyakude welcomed the intervention by government and pleaded with local authorities to spearhead these interventions so that they can be kept abreast at all times.

Business people who attended the meeting also highlighted some of their frustrations since the unrest took place. They indicated that some of their planned projects have taken a backseat and funds have dried up since then.

Gina will tomorrow meet with businesses in Durban to discuss urgent and effective ways and means of rebuilding the provincial economy by getting businesses that were affected back in full operation. The objective of the meeting is to assess the scale of the damage and to determine where state assistance – financial and otherwise – could be injected efficiently for the maximum recovery impact. 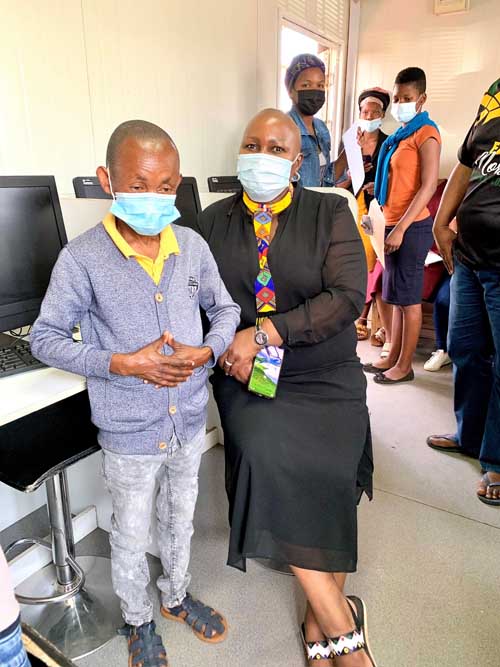 The Deputy Minister of Trade, Industry and Competition, Ms Nomalungelo Gina with the co-owner of Ezweni Media House, Mr Nkosinamandla Mafuleka in uMkhanyakude. Gina donated computers to the media house.