The Minister of Trade, Industry and Competition, Ebrahim Patel, along with industry stakeholders from the steel and metal fabrication sector signed a Master Plan for the sector on Friday 11 June 2021

The Master Plan, which has been developed in consultation with all stakeholders from the industry – including primary steel producers, downstream steel players, met fabricators, and organised labour – provides a blueprint for the industry to re-energise itself and expand production.

The steel industry plays an important role in South Africa’s industrial capacity, both as a direct driver of growth, investment and jobs, and as indirect facilitator of South Africa’s construction, automotive and mining sectors. South Africa is one of the largest steel producers on the African continent. According to the World Steel Association, South African steel manufacturers produced 5.7 million metric tons of crude steel in 2019, second only to Egypt on the continent, and the sector employs around 200 000 workers.  Top Steel consuming (mining, construction, autos) industries contribute R600 Billion to South Africa’s GDP (about 15% to GDP) and employs 8 million workers.

Addressing the audience, which was limited to ensure appropriate compliance with the current Covid-19 regulations, Minister Patel highlighted the role which the Master Plan can plan in energising the steel industry.

“The signing of the Master Plan sets the foundation and commitment for the development and growth of this important sector. The ceremony offers an opportunity for us to reaffirm the commitment to the steel industry’s social compact and the agreed implementation agenda.

“Learning from the other masterplans that are in implementation phases, there is a long and steep road ahead of us. Building consensus on the steel masterplan and agreeing on the actions to anchor the implementation was a much easier process. The hard-work has started in the implementation and will get even harder as we began to collectively tackle actions that are very difficult but necessary for the long-term development of this industry.” Said Minister Patel.

The signing ceremony was attended by the CEOs of a number of large steel industry companies, including Doron Barnes, Director of Hall Longmore, Elias Monage, President of the Steel and Engineering Industries Federation of Southern Africa (SEIFSA), as well as Irvin Jim, the General Secretary of the National Union of Metalworkers of South Africa (NUMSA), the Deputy Minister of Trade, Industry and Competition, Fikile Majola, and the Acting Director General of the Department of Trade, Industry and Competition, Malebo Mabitje-Thompson.

“We need to bring new hope to the nation, the workforce, the youth and graduates who have aspirations to enter this important industry. The implementation process will require a lot of trade-offs and a balanced approach for the betterment of the entire steel value chain.” said Deputy Minister Majola.

“De-instrutialisation is a choice and we should start to make the choice that we work together to get industrialisation going– the Steel Masterplan offers us one such opportunity to do this together as partners and citizens of South Africa.” Said Director-General Mabitje-Thompson.

To drive implementation of the Master Plan, a Steel Oversight Council has been established, with thirty-five members drawn from all parts of the industry, including up- and downstream industry players, organised labour and public sector officials. Meetings of the Steel Oversight Council commenced in February 2021, following the adoption of the Master Plan by the industry. 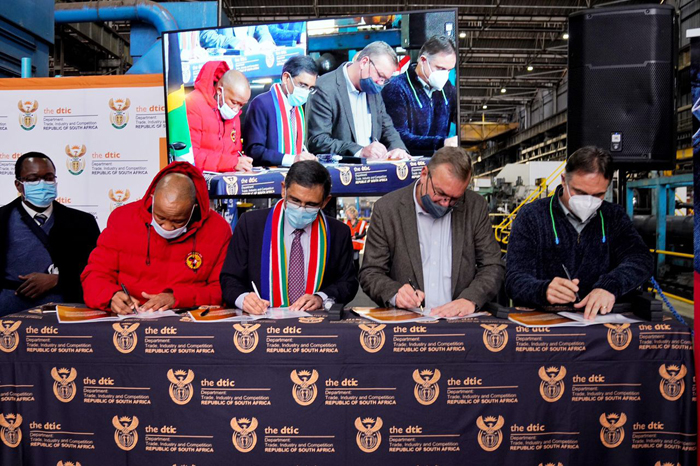 The Master Plan is available on the dtic website at: http://www.thedtic.gov.za/wp-content/uploads/Steel_Industry_Master_Plan.pdf