The Deputy Minister of Trade, Industry and Competition, Mr Fikile Majola, says new export opportunities that are emerging from the disruption in the global supply chains caused mainly by Covid-19 need to be fully utilised by South African businesses and other investment partners.

He was addressing a sod-turning event, to launch a carbon black production site at the Coega Special Economic Zone (SEZ) in Gqeberha. The carbon black project is borne out of a partnership between the Department of Trade, Industry and Competition (the dtic),  the Coega Development Corporation (CDC) and Orion Engineered Carbons (OEC) – a local producer of carbon black and Transnet National Ports Authority (TNPA).

OEC is the only local producer of a wide range of carbon blacks. The product is used in various industries, such as tyre industry, ink, coatings, batteries, plastics, and other high performance applications. Key interventions had to be made by the stakeholders  involved to save the project from risk of failure as it was put at risk by a decision of the Port of Port Elizabeth (PoPE) to close to liquid vessels by end of December 2022.

Transnet National Ports Authority (TNPA) then took a decision to relocate the liquid fuel storage to the Coega SEZ and the Department of Trade, Industry and Competition (the dtic) injected funding to the value of R202 million to make the carbon black project possible. The funding has made possible the development of two 18 000 cubic metre tanks for storage of carbon black feedstock with ancilliary infrastructure within Zone 7 of the Coega SEZ.

Carbon Black Feedstock (black oil) is currently being imported through the Port of Port Elizabeth, but through this initiative, it will now be manufactured into carbon black powder at the Coega SEZ to supply predominantly the tyre industry in the Eastern Cape and throughout South Africa (SA)

At the event, OEC Group Executive, Mr Corning Painter, revealed that the world has been changing fast due to the challenges brought about by the COVID 19 pandemic and this has opened new export opportunities for carbon black to the European market.

“We already have customers in Europe who are mainly tyre manufacturers that have made contact with us to request that we supply the carbon black product that will be produced at the new facility. We have commited to this, not only in the immediate short term, but in the long term as well,” Painter said.

In response, Deputy Minister Majola, urged more businesses in the country to look out for these opportunities and take advantage to ensure positive spin offs for economic recovery efforts. He commended all partners involved in the new initiative saying their interventions not only made it possible to retain the 120 jobs, it revealed the economic potential of Orion Engineered Carbon project.

“The manufacturing sector contributes about 14% to the GDP and therefore this project will play a fair share in contributing to the country’s manufacturing and export sectors. Furthermore, the fact that the construction of the storage facility and associated infrastructure will enable the creation of approximately 150 additional jobs (50-construction phase, and 100 jobs during the operational phase of the project) is highly appreciated. This is proof that coordinated efforts across the different spheres of government and the private sector can effectively realise the investment pipelines required,” Majola said.

The Eastern Cape MEC for Economic Development, Environmental Affairs and Tourism, Mr Mlungisi Mvoko says the provicial government’s long term plan is to capacitate the Coega SEZ and the East London Industrial Development Zone to be more than just being investment locations but to be engines of economic growth and employment in the Province.

“We shall continue to explore a grand giant leap forward to excel the existing potential of these entities to achieve sound industrial development for massive economic growth. By agreement, a targeted focus to achieve this multi-generational objective shall continuously bear its fruits from the foundations we lay today, into the future,” he said. 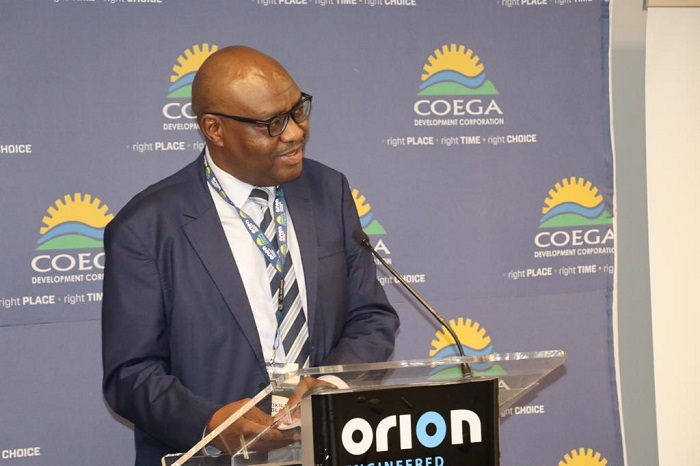 Deputy Minister of Trade, Industry and Competition, Mr Fikile Majola addressing the audience at the launch of the carbon black production site at the Coega Special Economic Zone (SEZ) in Gqeberha