The Deputy Minister of Trade, Industry and Competition, Mr Fikile Majola says the protection of the country’s infrastructure is the responsibility of every South African citizen. Majola was visiting Kagiso Mall in Mogale City to assess the damage caused during the recent looting and vandalism of some of the shops in the mall.

Majola was accompanied by the Executive Mayor of the West Rand District Municipality, Councillor Dennis Thabe, and the Station Commander of the Krugersdorp Police Station, Brigadier Themba Maduna.

“Infrastructure like malls, factories and businesses are the backbone of the South African economy and cost a lot of money and time to build. Therefore, it is the responsibility of all of the country’s citizens to protect our infrastructure, as we all know the economic benefits that communities, particularly those in the townships, derive from these buildings. The infrastructure in the township is a boost to the township economy, which as government, are working hard to develop. Malls like this one create jobs for our people and destroying them takes us many steps back. Government has been rolling out the economic recovery plan to get our economy back from the devastation of the Covid-19 pandemic, and now this wanton destruction of infrastructure,” said Majola.

Majola, who is also the national Champion of the District Development Model for the West Rand District Municipality, expressed government’s gratitude to the local police, taxi operators and community volunteers who prevented extensive looting and damage to the mall.

“If the police had not reacted swiftly, and the taxi operators and volunteers had not decided to stand up and said enough and no more, there would not be any Kagiso Mall to talk of today. What would have happened to the throngs of people that are flocking to the mall now, and all the people that are employed by the businesses operating in the mall?” asked Majola matter-of-factly.

He singled out the looting and vandalism of the Westside FM, a community radio station broadcasting from the mall, as extremely unfortunate and inconceivable. During a visit to the radio station, Majola learned from the station’s Chief Executive Officer, Mr Goodhope Ledwaba, that the station had lost equipment to the value of almost R1.5 million.

“Something is really amiss when we have the kind of people who fail to appreciate the value of having a radio station in their midst. This really tells you there was more to this wanton destruction and looting than meets the eye. This is the fountain of information and knowledge. It also contributes in deepening democracy by providing a voice to all members of this community,” said Majola who promised to mobilise resources from relevant industry stakeholders to assist the radio station replace the looted equipment. 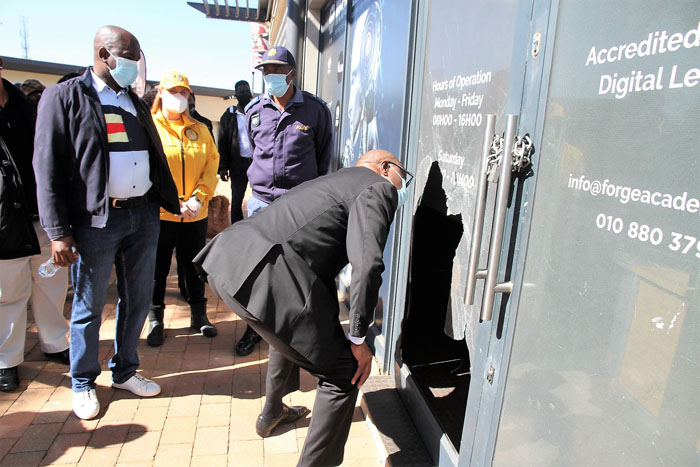 The Deputy Minister of Trade, Industry and Competition, Mr Fikile Majola inspecting damage caused to Forge Academy at the Kagiso Mall where laptops were stolen during the recent civil unrests, as the Executive Mayor of the West Rand District Municipality, Councillor Dennis Thabe and the Station Commander of the Krugersdorp Police Station, Brigadier Themba Maduna look on.