The Deputy Minister of Trade and Industry, Ms Nomalungelo Gina kicked off her long-week visit to KwaZulu-Natal with a visit to the Richards Bay Industrial Development Zone (RBIDZ).

Gina’s visit was part of the national Siyahlola Programme whose purpose is to assess progress made in the implementation of the Special Economic Zones Programme (SEZ), Revitalisation of Industrial Parks Programme, and the sector-specific Master Plans that are part of the re-imagined national industrial development strategy.

Gina met with the City of uMhlathuze Mayor, Mr Mduduzi Mhlongo, RBIDZ’s Chairperson Mel Clark, Acting Chief Executive Officer, Ms Simangele Ngcobo and other senior government officials from KwaZulu-Natal. Gina reiterated that that the SEZ programme is one of the key instruments that are used to achieve the objectives of the Economic Reconstruction and Recovery Plan.

Gina said the dtic as a critical stakeholder in the implementation of the RBIDZ and custodian of the SEZ programme, they are happy with the progress made  in relation to the investment drive and job creation efforts.

“Government has to create a platform where shareholders and investors can be able to feel the impact of our intervention when it comes to Foreign and Domestic Direct Investments in these zones. We need to look at the whole value chain and identify projects that will be able to empower all surrounding areas including entrepreneurs outside these zones,” Gina said.

She added that programmes like Siyahlola will results in tangible things being achieved through sharing of ideas at all levels.

RBIDZ’s Acting Chief Executive Officer, Ms Simangele Ngcobo believe that Siyahlola Programme will strengthen all efforts aimed at turning around the circumstances in the face of destruction caused by COVID-19.

“The recorded progress evidenced by the commencement of construction by the two catalyst investment projects being Wilmar Processing SA (Pty) Ltd and Nyanza Light Metals (Pty) Ltd, which are investing a combined private investment value of R5.8 billion.  They are expected to create approximately 800 direct jobs.  These investments are expected to create estimated 2200 construction jobs. These projects come at a time when there has been a sharp decline in the construction sector and an increase in unemployment globally,” said Ngcobo.

Ngcobo said they are very motivated to witness this breakthrough and appreciate the support by all spheres of government – nationally, provincially and locally. She added that RBIDZ is  pleased that the Deputy Minister commended the positive progress by the entity and further committed to intervene in resolving bottlenecks with the speed that these deserve.

“RBIDZ remains a strategic asset that will help change the face of the province moving forward. We are determined to contribute towards the creation of employment leveraging on the direct investments with different sectors of the economy being targeted to drive growth, spiralling skills transfer as well as value chain benefits to the people at large remarked RBIDZ,” she said. 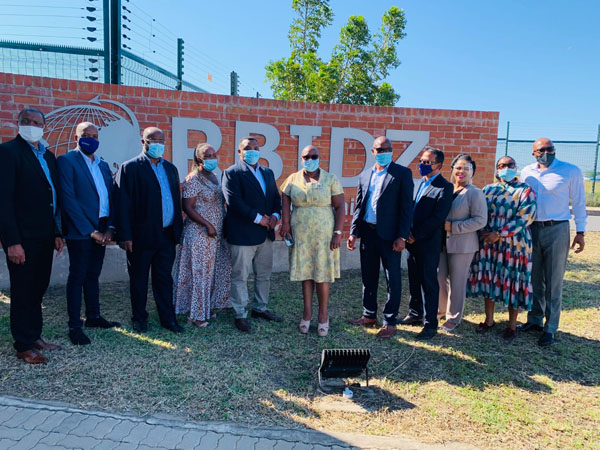